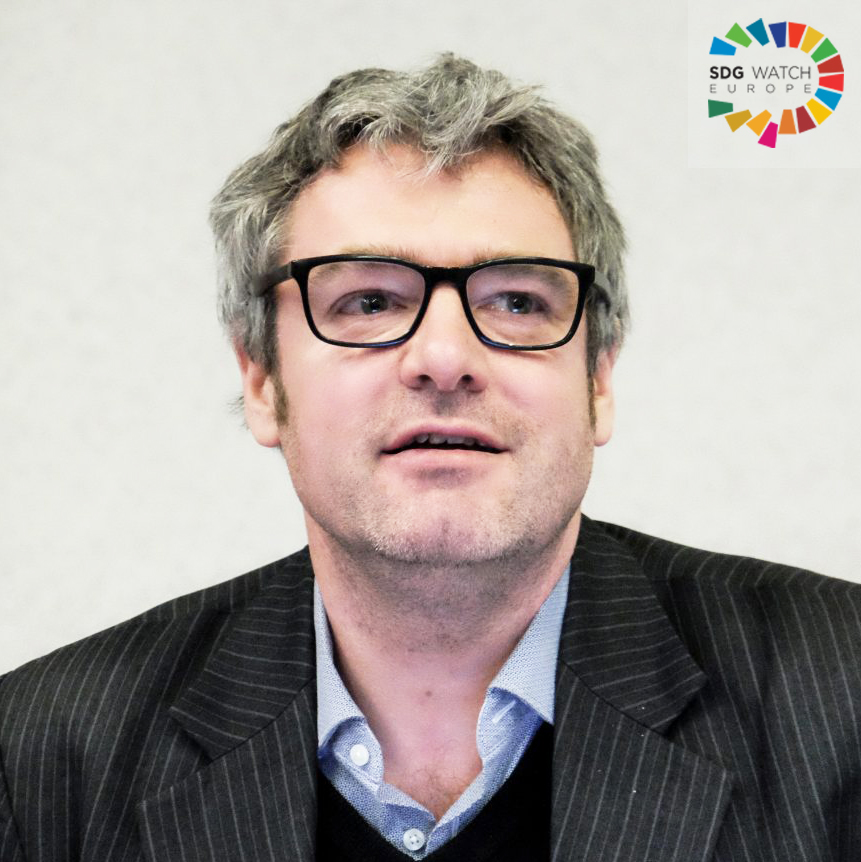 Ingo Ritz is the Director of the Global Call to Action Against Poverty (GCAP). The global movement against inequalities and poverty has 8,600 member organisations from civil society working together in national coalitions in 58 countries around the globe. GCAP uses the Agenda 2030 and the SDGs as a framework for the just transition needed for people and planet. Ritz is economist and worked 20 years with grassroots organisations in Bangladesh and India for women’s rights, the right to food, education and against the shrinking space of civil society. 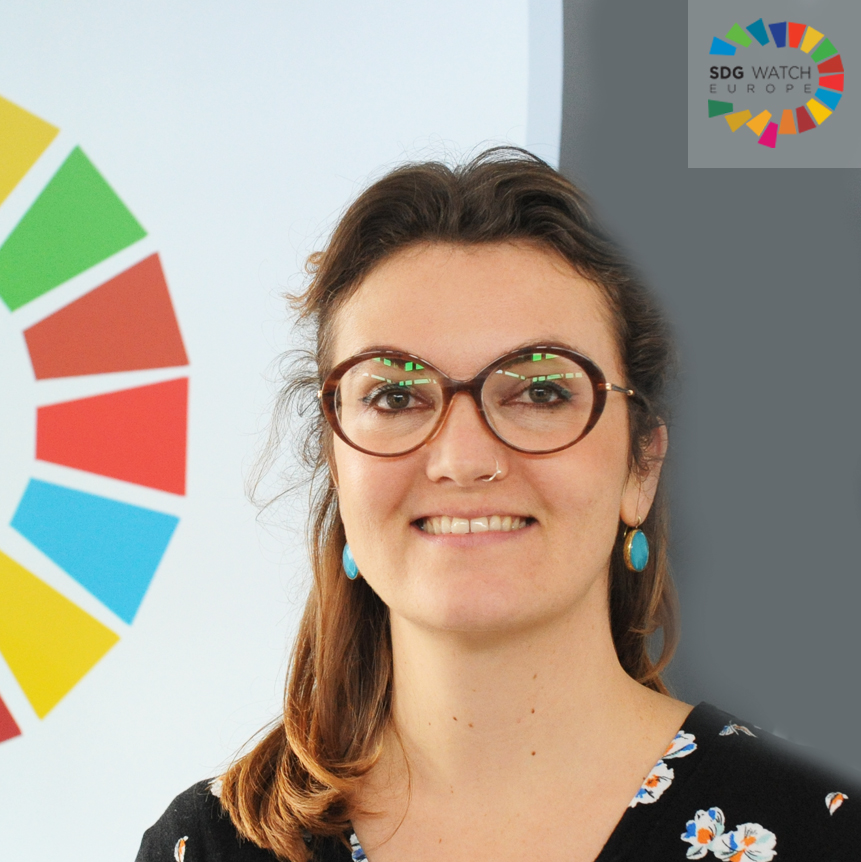 Director of Global Policies and Sustainability at the EEB

Patrizia has joined the Steering Group in 2017. She leads the EEB’s work on sustainable development and the Sustainable Development Goals (SDGs), follows intergovernmental processes at the UN, and supports projects on environmental democracy as well as environmental justice.

She was previously Executive Director of the NGO Shipbreaking Platform, a global coalition of 19 environmental, human and labour rights organisations seeking to prevent unsustainable industrial practices in developing countries as well as illegal waste shipments. She has experience working on human rights and development issues in South Asia. 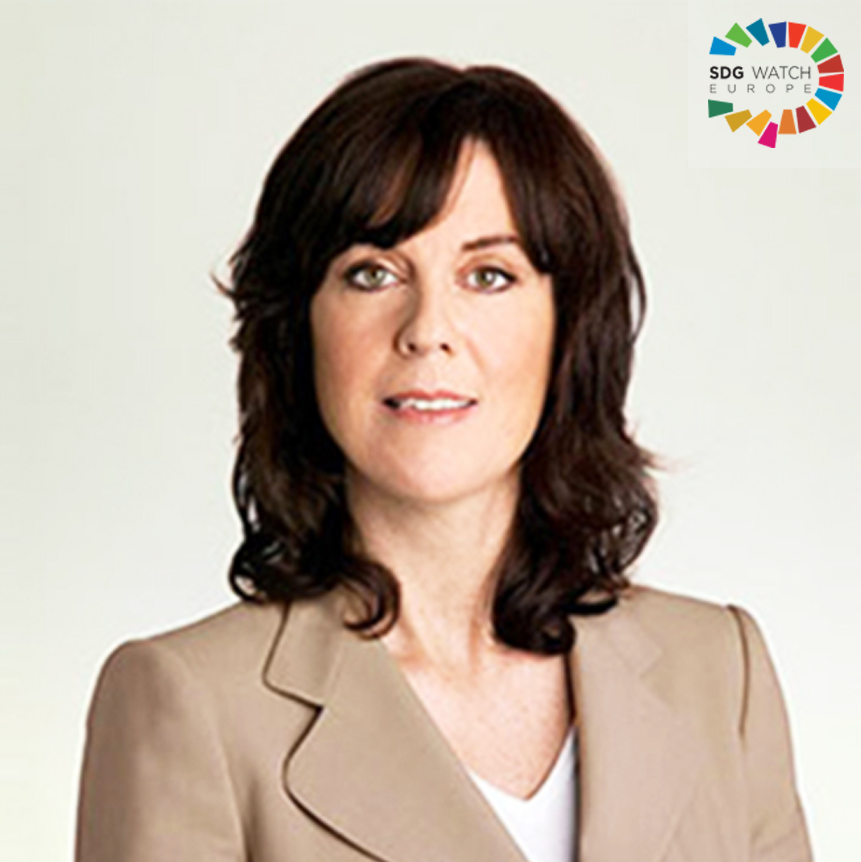 Deirdre currently works as an Advocacy Co-ordinator for a development network. She previously worked as a Director of Advocacy for World Vision’s EU office

She was also a member of the EU Steering Committee of Concord’s Beyond 2015 EU Taskforce which played an important role in influencing the position of the EU and its Member States during the UN negotiations on Agenda 2030. Deirdre was also one of the founding members of SDG Watch Europe. 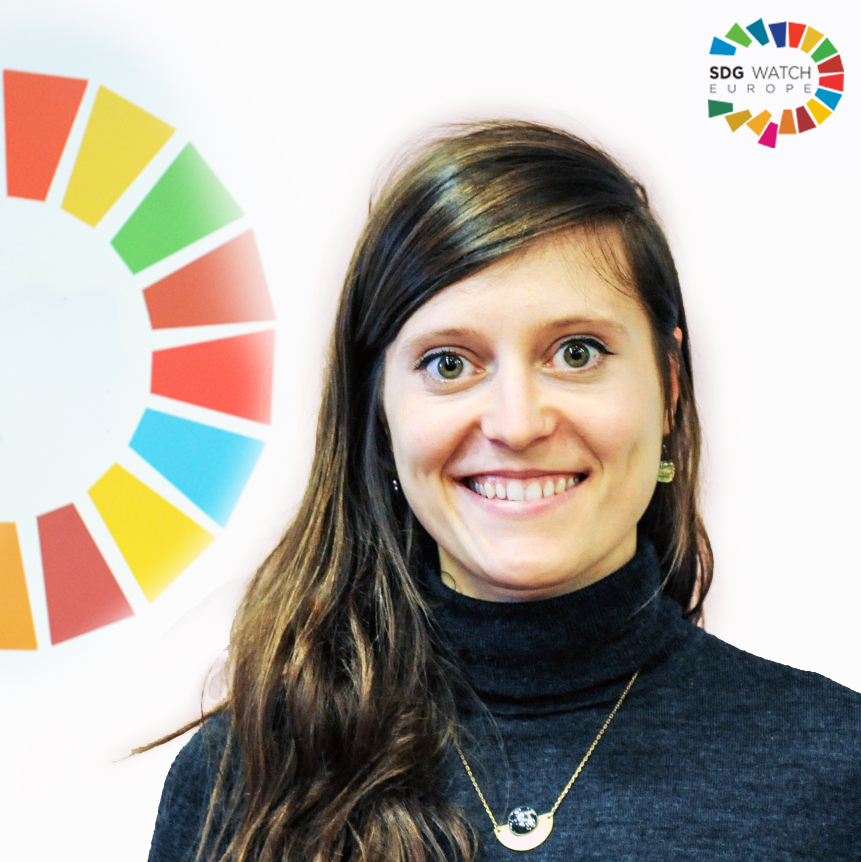 Marie-Luise Abshagen works with the German NGO Forum on Environment and Development as a Policy Officer on Sustainable Development. She holds a Master of Arts in East Asian Studies and Political Science, studied in Leipzig (Germany), Tübingen (Germany) and Taipei (Taiwan) and has lived in the USA, Taiwan, China and South Korea. For many years, Ms Abshagen has been engaged in human rights work and the achievement of sustainable development. In Germany, she is a member of two advisory boards on “New Alliance for Sustainability Policies” and “(Right-wing) Radicalization and Nature Conservation” 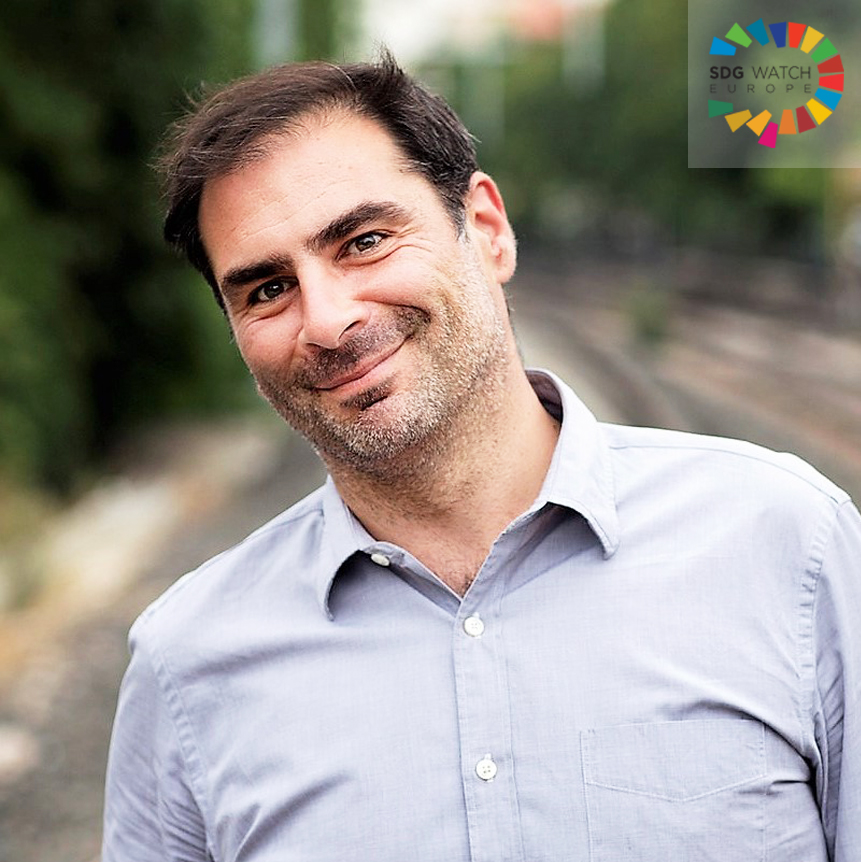 Executive Director at Organization Earth & President at the Hellenic Platform

Constantinos Machairas is the Executive Director of Organization Earth, a Greek CSO offering non-formal education regarding sustainable urban lifestyles and organizing collective actions concerning the implementation of Agenda 2030. He also serves as the General Secretary of IFOAM AgriBioMediterraneo, the regional group consisting of the members from the Med countries of the International Federation of Organic Agricultural Movement (IFOAM). Since November 2016, Constantinos has been the President of the Hellenic Platform for Development, the umbrella-organization for the coalition of Greek NGOs. For the last ten years, he’s been active within Greek Civil Society, holding various roles and positions, such as member of the Board at ActionAid Hellas, at Vocational Training Center Margarita whose mission is to improve the lives of people with light and mild intellectual disabilities and at the recently established UN Global Compact Greece. 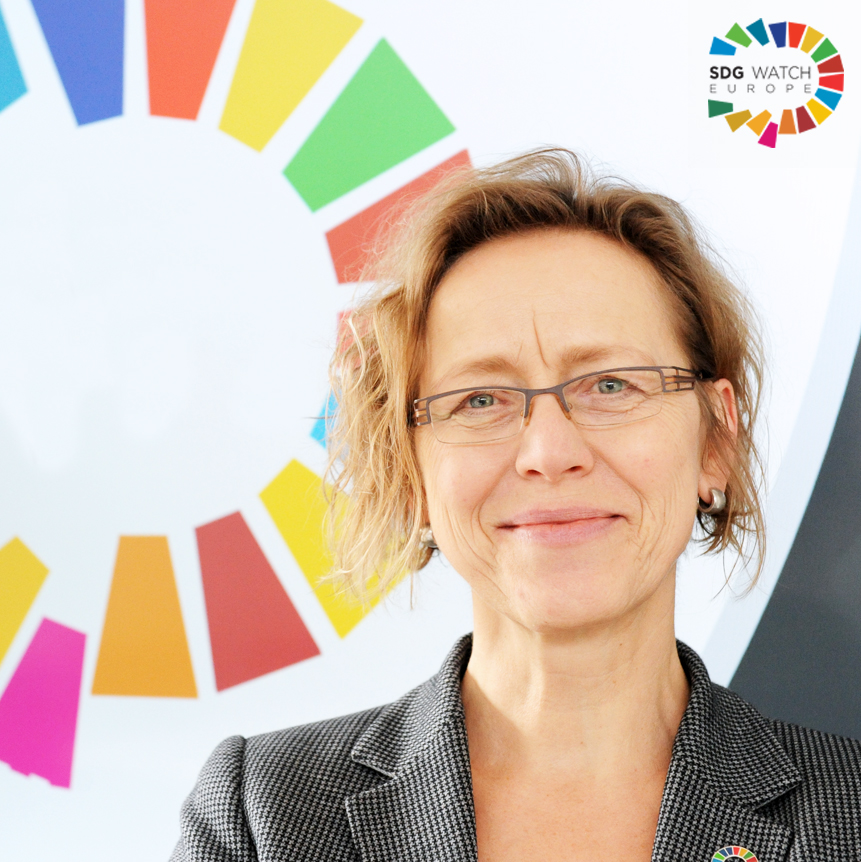 Associate at IISD and EU liaison

Ingeborg has two decades experience in European and international policy-making and multi-stakeholder relations, inter alia as Director of the European network of advisory councils for environmental policy and sustainable development (EEAC). In this function she was strongly involved in the Rio+20 process and has worked in various capacities on the Agenda 2030 implementation ever since. She has (co-)authored, lead and collaborated in a number of studies on governance for sustainable development, including regulatory/sustainability impact assessment. She is Associate of the International Institute for Sustainable Development (IISD) and brings in the science-policy interface to SDG Watch as facilitator of Strand 2 ‘Monitoring and Reporting’. She is representative of SDG Watch in the management committee of the EU Multi Stakeholder Platform on the implementation of the 2030 Agenda. 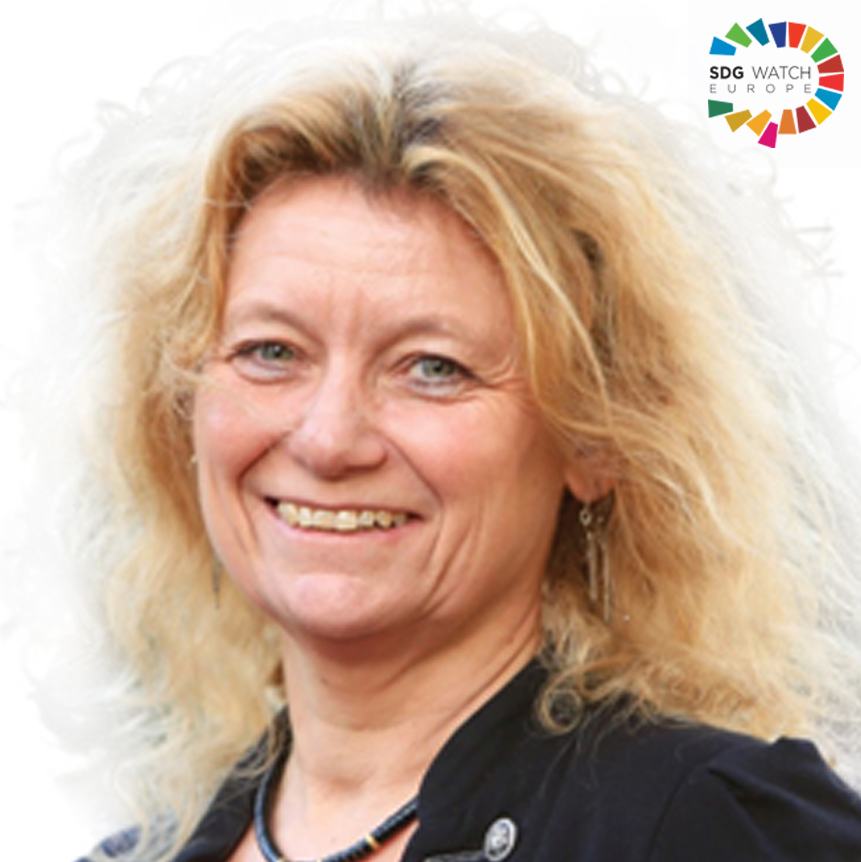 Leida Rijnhout is programme coordinator of Resource Justice and Sustainability at Friends of the Earth Europe. Since 2001 she facilitated and coordinated the global NGO community to realise their active engagement in United Nations processes on Sustainable Development and Environment. She was heavily involved at and in the preparations of the Summit on Sustainable Development in 2002 (Johannesburg), at Rio+20 in 2012 (Rio de Janeiro), the development of the UN 2030 Sustainable Development Agenda (SDGs) and the UN Environment Assemblies. She is the initiator of SDG Watch and is still member of the Steering group. As representative for this alliance she is also member of the EU Multi Stakeholder Platform on the implementation of the 2030 Agenda, chaired by EU Vice President Frans Timmermans. 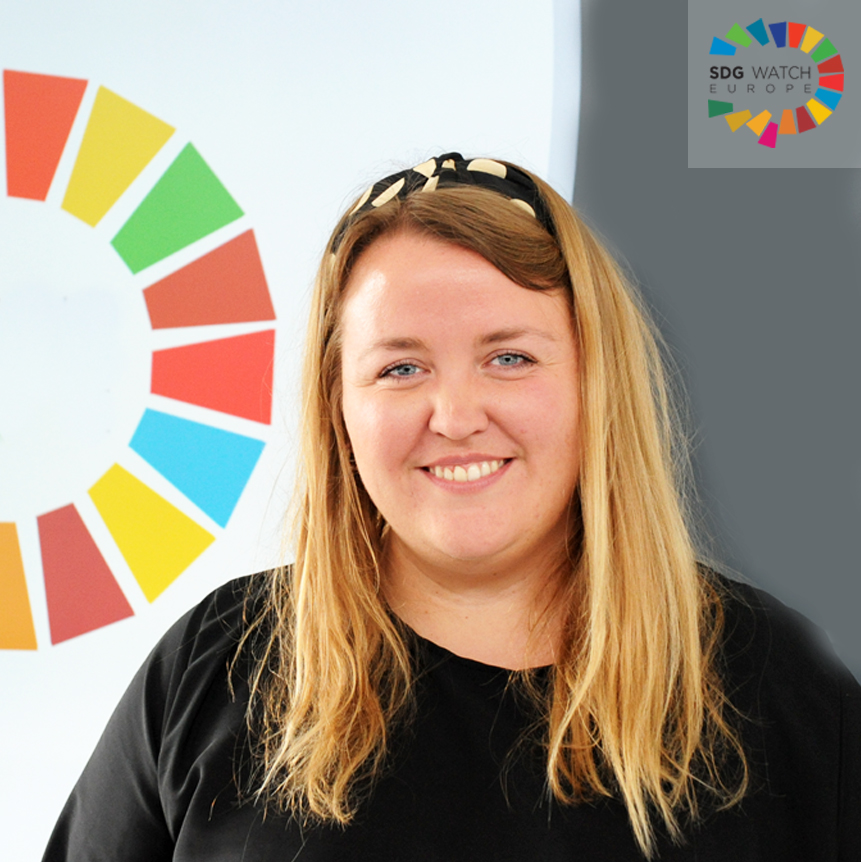 Julie Rosenkilde is director of the Danish NGO Nyt Europa, who are focusing on the SDG implementation in an EU and national context. Julie has a master’s in International Development Studies and Public Administration (doing her thesis on the SDG-negotiations process in the UN) from Roskilde University in Denmark and a MA in Political Communication from Goldsmiths University of London.  Since the adoption of the SDG in 2015, Julie has been working on the SDG agenda. She has the years been working with engaging especially citizens on a national and local level in Denmark. She has been leading awareness raising campaigns about the SDGs and made concrete engagement activities for citizens, on how they can actively engage in the SDG agenda, from debating in open conferences to games being used in Schools. Furthermore Julie, has put the SDG-EU agenda on a national level, and have pushed for a strong national position on the EU relations to the SDGs. She will work on strengthening national involvement in a strong EU adoption and action plan for the SDGs in different international fora. 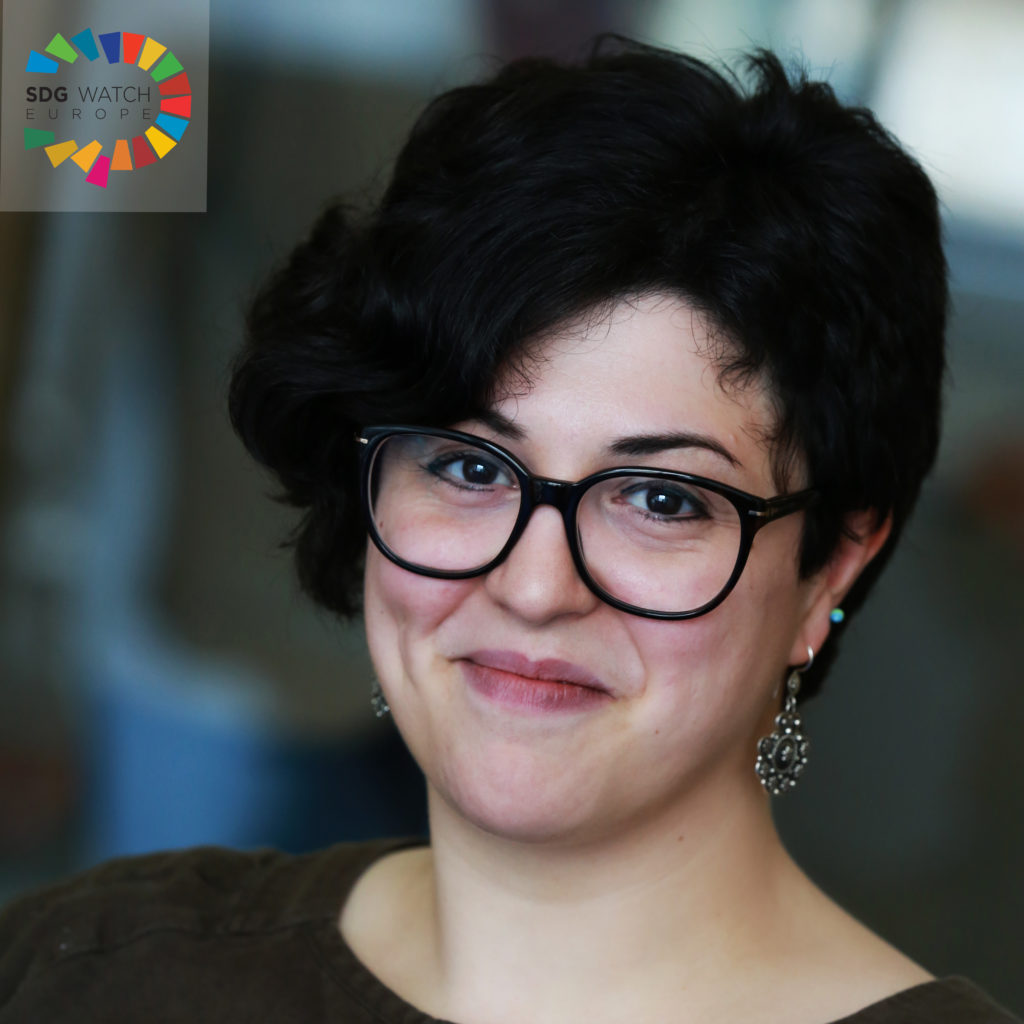 Laura de Bonfils is currently working at the Social Platform as policy and advocacy coordinator. Before taking her new role, she was the Social Policy Coordinator at SOLIDAR, where she coordinated the work for building Social Europe focusing on social rights social inclusion and employment, monitoring the European Semester and the implementation of the European Pillar of Social Rights (EPSR). Prior to this she was the International Policy, Advocacy and Fundraising Manager at Volonteurope while also working at the UK charity Volunteering Matters, focusing on volunteering, active citizenship and combatting inequalities.

Prior to this she worked as a freelance researcher in social policy with a focus on equality, employment and migration. She worked at the European Institute for Gender Equality in Vilnius from 2012 to 2013, co-authoring the first edition of the Gender Equality Index. She has also experience working in several communications teams in non-profit organisations as well as working as a journalist for several Italian media, and as a Communications Officer for international events and theatre performances. She holds an MSc in Gender, Media and Culture at the London School of Economics and Political Science and an MA in Publishing and Journalism at LUMSA University in Rome.

Make Europe Sustainable for all project manager at EEB

Associate at IISD and EU liaison 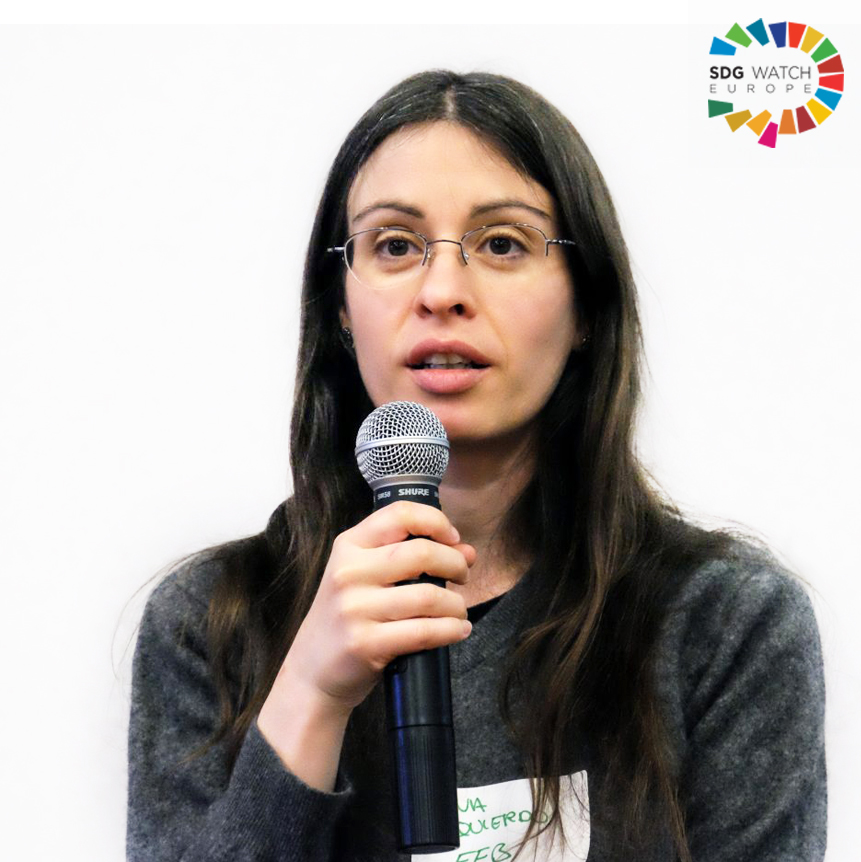 Director of Global Policies and Sustainability at EEB

Former Members of the Steering Committee 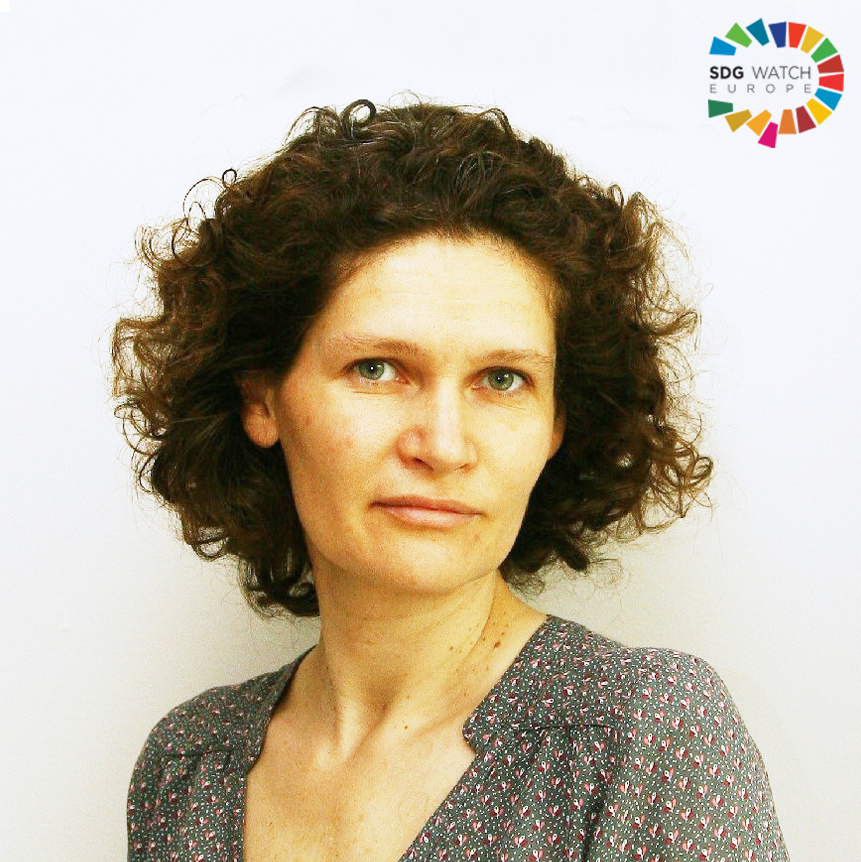 I have experience in international and EU biodiversity and resource policies, and special interest in holistic approaches for sustainable development. I have been involved in European campaigns and coalitions, like the Resource Cap Coalition proactively calling for progressive resource use and climate policies. I was an initiator and a co-leader of the People’s Budget campaign since its kick-off in 2016, which demands the sustainability proofing of the future EU Budget and its alignment with the SDGs. The campaign brings together dozens of organisations from various fields working on the EU budget under the sustainability umbrella. I am based in Budapest working at CEEweb for Biodiversity, a regional network in Central and Easter Europe since 2000. 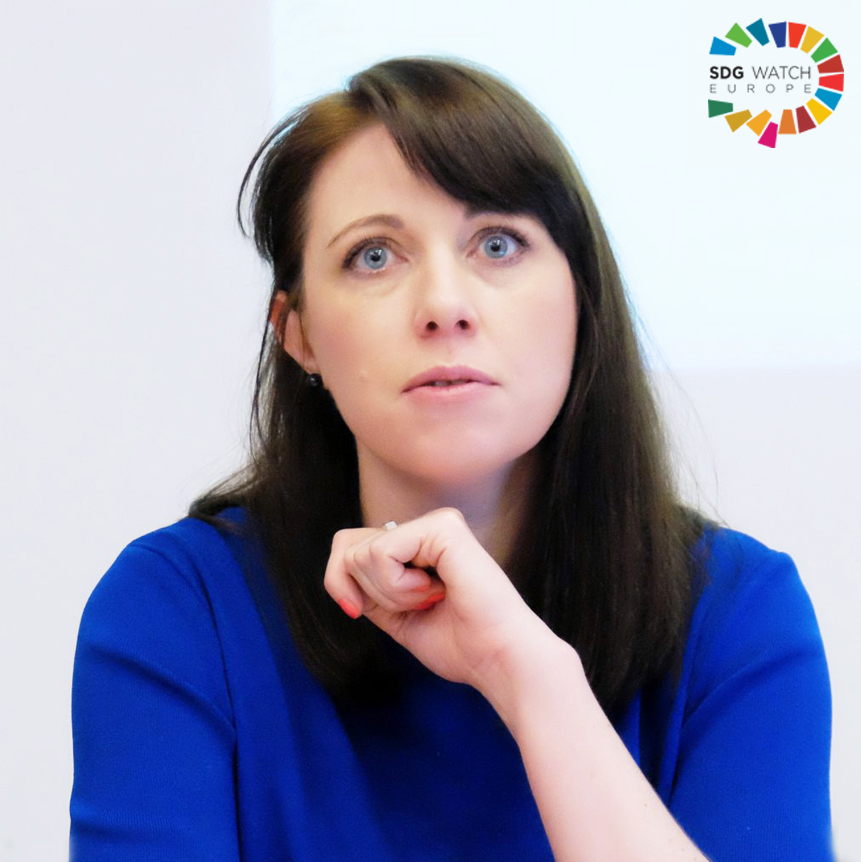 Alison has been working on issues related to Sustainable Development, at both the EU and international level for the previous 8 years. Having worked with both environmental and social justice NGOs she has an in-depth knowledge of issues related to a number of sustainable development goals, and appreciates the importance of tackling Agenda 2030 as a whole.

Alison has worked with Transparency International since 2014 working on anti-corruption and transparency policies related to development. Alison has a BSc in zoology and ecology, and an MSc in Environmental Science Policy Planning. 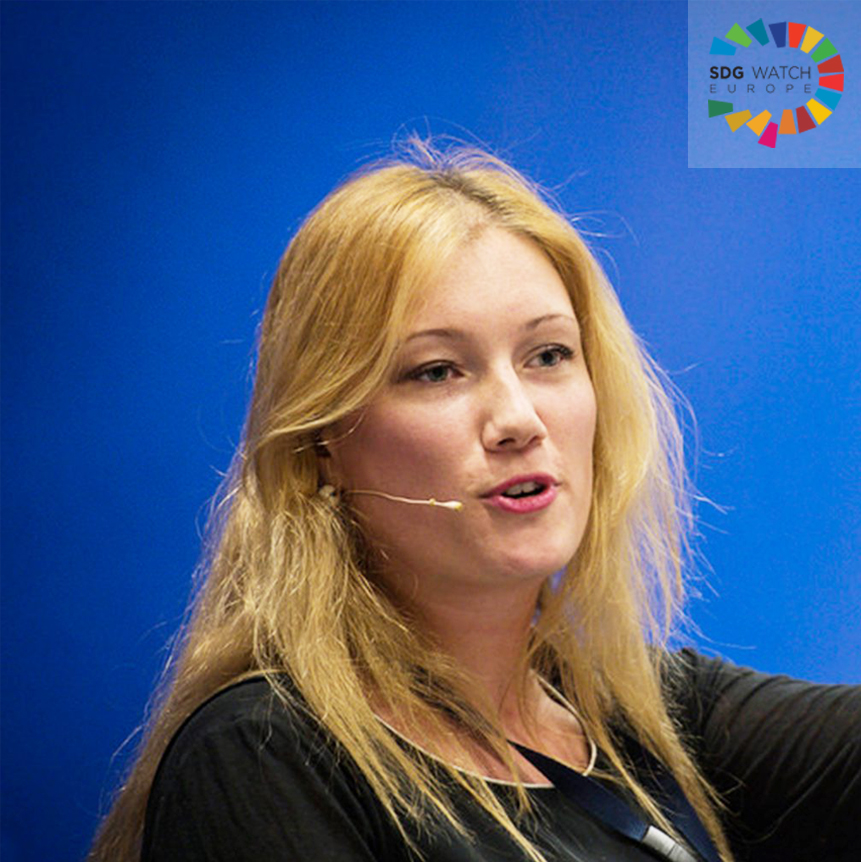 Head of EU Office at GHA

After graduating in Conflict Studies and Human Rights, Fanny Voitzwinkler worked on minority rights projects for the European Centre for Minority Issues in Kosovo, on peacebuilding and conflict transformation in the United Nations Africa Peacekeeping Operations in New York, on emergency health aid with the Palestinian Medical Relief Society in the occupied Palestinian territories, on children’s rights campaigns for the Council of Europe and on multilateral relations with the European Commission. In 2011 she created the Global Health Advocates’ Brussels office. She develops and implements the strategy of GHA at EU level, where she leads a team of 4 Advocacy & Policy Managers and Officers. 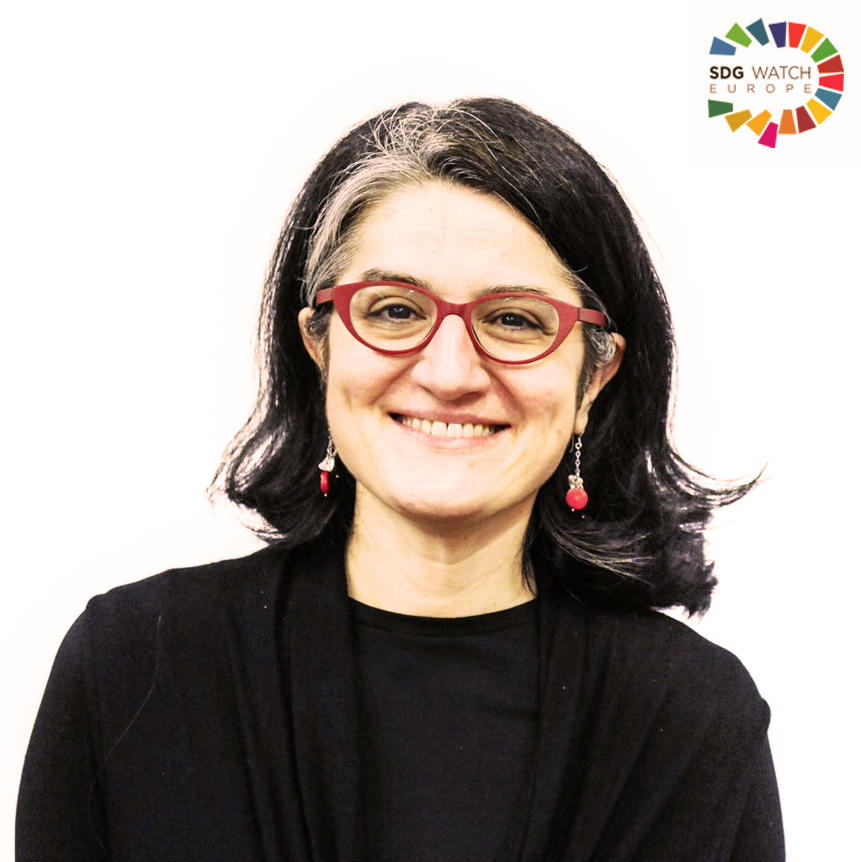 Barbara Caracciolo is Sustainable Development Coordinator at SOLIDAR. She leads SOLIDAR advocacy and campaign work on the 2030 Agenda for Sustainable Development with a focus on Decent Work, as well as on the EU-Latin America relations. Passionate about universal labour and social rights, between 2009 and 2013, Barbara was SOLIDAR coordinator of the Decent Work Decent Life Campaign and lead the network’s campaign and advocacy work for an international instrument on Decent work for Domestic Workers and on Universal Social Protection floors.

Join
The content of this website is generated by civil society organisations which are either members or partners of SDG Watch Europe. The opinions expressed do not necessarily always reflect the opinions of all members of SDG Watch Europe or the coalition itself. The content of this website is provided for information purposes only. No claim is made as to the accuracy or authenticity of the content and the website does not accept any liability to any person or organisation for the information or advice which is provided or incorporated into it by reference. This website has been produced and maintained with the financial assistance of the European Union. The contents of this website are the sole responsibility of the authors and can in no way be taken to reflect the views of the European Union.
JOIN OUR MAILING LIST TO RECEIVE OUR MONTHLY NEWSLETTERCloseRead more